A Civilized Change of Pace

It’s nice to have a variety of places to camp in the RV. We love state parks but we also like to explore some of Florida’s small towns. To do that we sometimes stay at a full-service RV park. And that’s what we did last week.

One of our favorite towns is Mt. Dora located just north of bustling Disney World in Central Florida. Located in Lake County, Mt. Dora is surrounded by bodies of water, large and small. Our RV park was called Woods ‘n Water. It sits on the banks of Lake Saunders and is beautifully maintained. I opted for a site away from the lake. While it’s pretty during the day, I didn’t want to walk dogs at night near the little inlet below. 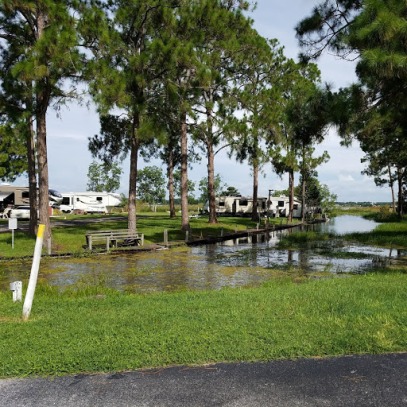 Florida is generally very flat and, after awhile, we transplants from the north yearn for some rolling countryside. Mt. Dora provides that. It sits at one of the higher elevations in Florida, a whopping 184 ft. The town is sometimes referred to as Florida’s New England because of the hills and the architecture. On this trip, I took a drive along the shores of Lake Dora and I was very impressed. Many of the homes on the lake rival this one for their beauty and wonderful settings. This particular house is now a bed and breakfast.

Just east of Mt. Dora is Renninger’s, a huge antiques emporium with hundreds of dealers. It takes hours of browsing to do it justice. Merchandise ranges from old rusty garden tools to high end antique furniture and jewelry. In addition to the main buildings, Renninger’s hosts flea markets several times a year and people come from far and near to set up shop along the hillside and sell things they have collected. The smart ones have tarps ready for those inevitable central Florida thunderstorms. 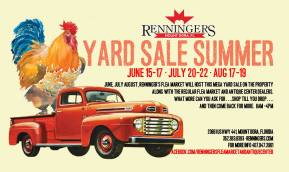 Downtown Mt. Dora used to be an antiquer’s paradise with dozens of antique shops. However, I was told only one antique shop is left in town. I spoke with two dealers at Renninger’s and learned that recently a wealthy developer took a liking to the town and came in and bought many of the buildings. He raised the rents and many shops went out of business. Sadly, most of the stores now just sell touristy stuff.

I’ve performed in a lot of community theater over the years so I like to scout out the theaters in towns we visit. On this trip I decided to see a show at Mt. Dora’s Ice House Theatre, now called The Sonnentag. The company has a 12-month season with a new show every other month. I saw the musical Sweet Charity that I had done 30 years ago. This group of local actors did a fine job.

The older I get the more fascinated I am by history. Although Mt. Dora is not as old as many northern towns in America, it has an interesting past. The original theater opened in 1948 in a converted ice plant on the shore of Lake Dora where the Yacht Club now sits. This blurred little photo reminds me how important it is to take pictures. Maybe it’s the only one still around of this significant bit of history.

In 1957 a new theater was built on the east side of Mt. Dora. Even the “new” building needed refurbishing after 60 years and I’m happy to report that everything looks great. The artistic director handed me my ticket at the box office, introduced the show to the audience, and sold me some candy at intermission. It is a true community theater and worth a visit.

Since I was going to spend more time in town on this trip, I took just two dogs. Rico the psychohuahua travels like a pro. He is relaxed and the motion of the vehicle lulls him to sleep in no time. Binski, on the other hand, is tense. He won’t allow himself to doze off, so he semi-reclines, head nodding, eyelids drooping, fighting sleep all the way. By the time we get to our destination, he is exhausted and has to hibernate for awhile. 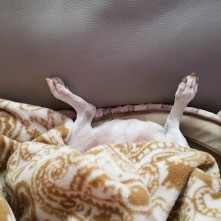 Driving an RV is generally harder than driving a car, especially at highway speeds. And in our typical summer rain and cross-winds it can be a real challenge. So, for the 150-mile trip to Mt. Dora I chose some two-lane roads that meandered through small villages and lots of open land. On the day of our return trip, the forecast was for possible severe thunderstorms and hail. I had planned to do a few things that morning but opted for a safe drive home instead. By leaving early we were able to outrun the weather system as it swept south out of Georgia.

My very well-behaved traveling companions deserved a treat, so we made a final stop at McDonald’s for a cheeseburger. And Rico took the time to pose for a photo. An hour later we arrived home safely from another enjoyable trip. 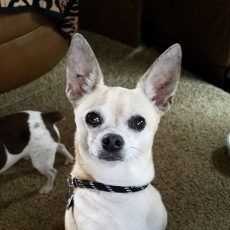