Rico is THE BOSS. After all, he is a chihuahua.

We got Rico from Underdog Rescue in Bradenton, Florida who rescued him from a high-kill shelter in Central Florida. He was found on the streets when he was about a year old. He must have been through a lot of trauma because he had night terrors for a year after we got him. Binski seemed to know his new friend was scared and he helped him feel at home.

When we first got him, he began fussing with another dog. I decided to pick him up and put him in another room to show him who was boss. Big mistake. Needless to say, I was the one who learned who was boss.

Rico is the smartest dog we have. And he is very spoiled. When he eats, which is only once a day and never before mid-afternoon, he requires an audience. Every meal is a command performance; the other dogs have to be there to watch. He could be an ad exec because he sure knows how to advertise. When he has a treat, he perches it in the most conspicuous place and gives us all the evil eye. This treat was just sticky enough to cling to the side of his bed.

Rico has been a challenge but, after four years, he has calmed down and is learning to trust. He shows me he loves me by snuggling next to me and by running to me when he is scared. Most of the time Rico “takes care of us” – at home he makes sure all of us are in the door before he will come in. And he goes from room to room to check on us. Rico has found his family.

Like most chihuahuas, Rico likes to lounge in the sun. He prefers a patch of dirt outside but a pillow near a sunny window will do in a pinch. 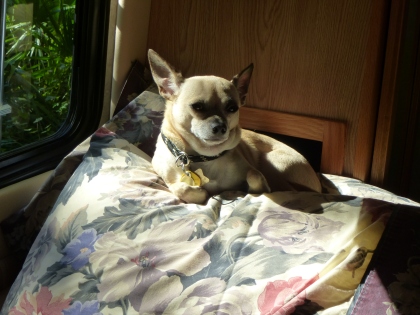